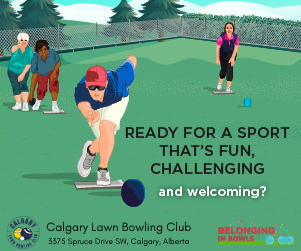 Below is the Bowls Canada Boulingrin’s latest version of the Bowler’s Handbook published in 2017. This handbook has sections from “Introduction to the Game”, to the “Basic Hand Signals” used in the game. This is a good read for both beginners to the game, and for the most experienced Bowlers.

Also, the Laws of the Sport of Bowls published by Crystal Mark, for those looking at in depth rules and international rules for tournaments. 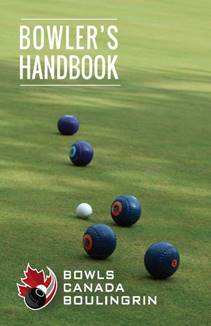 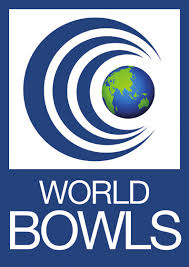 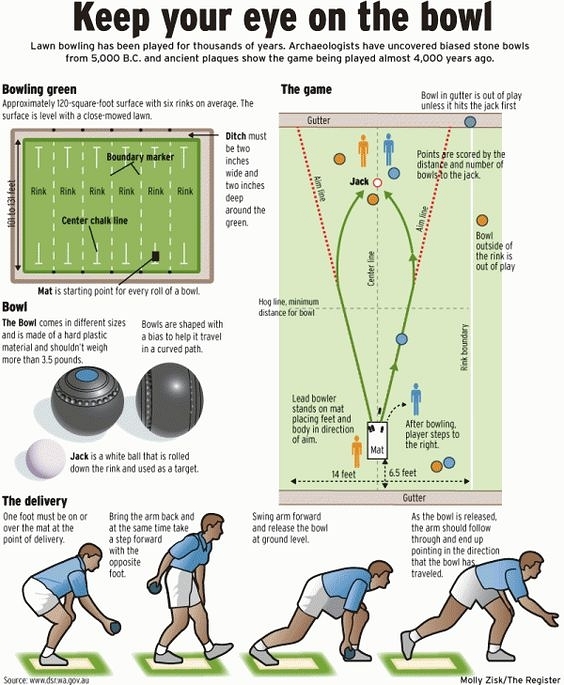 You can consider this your introduction to how to lawn bowl, or as it is otherwise known play “Bowls”

This game in one form or another has been around for a very long time. It combines strategy, skill, social interaction, some degree of exercise, affordability, competition, and FUN. It is a simple game to learn the basics, but requires a lifetime to “perfect”, if in fact that is achievable.

Bowls is played on a flat grass surface, called a green. You play on a designated rink on the green, indicated by a number at each end at the ditches and white stakes on the banks for boundary markers.

The skill in the game is mastering the weight required to reach the target (the Jack) and finding the proper line to see the arc of your bowl bring it closer to the Jack than any other bowl. This track will vary dependent on the weight thrown and different green and weather conditions.

The game can be between individuals (Singles), or teams of two (Pairs), three (Triples) or four (Rinks or Fours).

The teams’ bowls will all be matched sets of two, three or four bowls, with differing marks in the centre of them, and you need to identify your team’s bowls from your opposition’s bowls, by those distinguishing marks.

A game will normally be a given number of ends agreed upon prior to starting, or in the tournament rules, except for Singles which are usually played until someone gets to 21 points.

The teams toss for the right to choose to start or have the final bowl of the first end. After every end, the team which won the end have to roll the jack and the first bowl on the next end.

The person rolling the Jack also gets to set the mat, from which everyone will roll their bowls. The mat must be placed in the centre of the rink, at least two meters out from the near ditch, and not further than the nearest “hog” line. When a bowler releases their bowl, they must have one foot on or above the mat at the point of release to be a legal delivery.

The Jack is rolled first, and it has no bias so goes in a straight line. You may roll the jack any distance as long as it is between the “hog” line and the ditch, and is at least 21 meters down the green from the mat. As a result you can control the length of the end to play long or short ends depending upon your team’s preference, or your opponents’ perceived weakness.   The Jack is then centered in the green before rolling the first bowl.

Then the bowls are delivered by alternating between the opposing teams, the leads playing their bowls first, then the seconds, then the thirds, and finally the skips roll theirs. If your bowl hits the Jack it is marked with chalk to signify it is a “toucher’ and will still be “live” if it ends up in the ditch on its own lane.

After all bowls are rolled, that end is concluded, and the team closest to the Jack gets a point (a “shot”) for every bowl they have nearer to it than their opponents’ nearest bowl. If the Jack is bumped off the green to the side across the boundary line with the next rink, the end is “burnt” or “dead”, and may need to be replayed, while if the Jack is bumped into the ditch on your own rink, the end continues, with the nearest “live” bowls being the counters. A live bowl is any bowl on the green within the lane markers, or in the ditch, after hitting the Jack on its original path down the green (a toucher).

The game has some added issues, since the Jack can be moved by any bowl rolled down the green, so that bowls which were lying shot at one point in the end may no longer be the closest at the conclusion of the end. It is therefore essential that someone pay attention to where all the opponents’ bowls are in any given end, in order to consider the need for a defensive shot, to get one of your bowls amongst your opponents’ cluster, or in the track that your opponent may want to use to move the Jack.